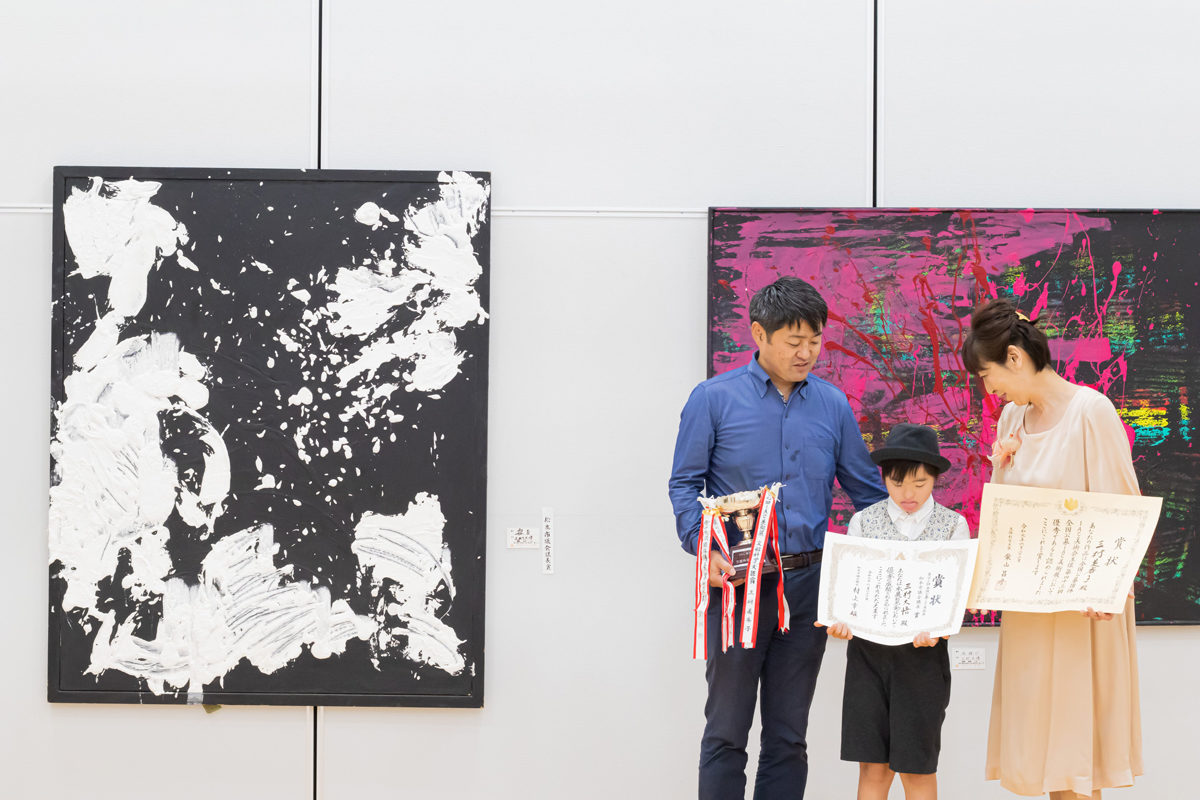 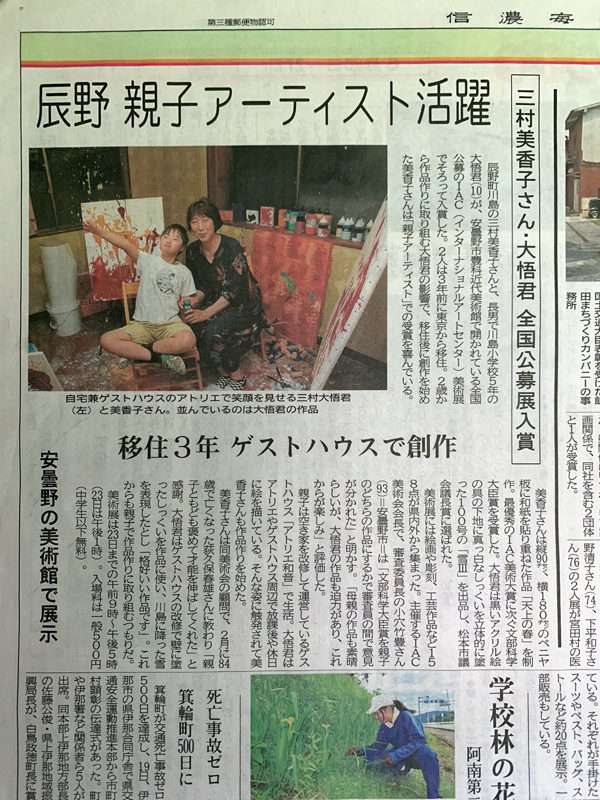 Artworks done by Mrs. Mikako Mimura and her son Daigo aged 10 who live in Kawashima in Tatsuno town won the Nation- wide publicly offered art exhibition sponsored by IAC (International Art Center).
(Their works are being displayed at the Toyoshina modern Art museum.)

They moved to Kawashima from Tokyo three years ago.
Mrs. Mimura was influenced by Daigo, who has carried on artistic activity since he was 2 years old, initiated to create artwork, too.

She is delighted to be awarded together with her son,Daigo.

Her work is to paste layer upon layer of Washi (Japanese traditional handcraft paper) on a plywood having dimensional size of 90 centimeters by 180 centimeters.
The work is named “Supernal Spring time”.

Her work received the Minister of Education, Culture, Sports, Science and Technology award which is next to the highest award “IAC Award”.

Daigo’s work is to put pure white plaster on a black base – colored acrylic board having dimensional size of 162 centimeters by 112 centimeters,
The work is named “SnowⅢ”and won the Chairman of the Matumoto Municipal Assembly award

The exhibition attracted 158 works, paintings, carvings and craftworks from within and without Nagano Prefecture.

Mr. Koana Taketoyo, the chairman of IAC, and the head of the judge organizer of the event said that there were different views on which work deserves the Minister of Education, Culture, Sports, Science and Technology award.
Although Mother’s work is notable showing, Daigo’s work is dynamic and has a tremendous impact.
He shows promising ability of artwork.

Mrs.Mikako and Daigo live in a renovated unoccupied house called “Studio Waon”.
On holidays or after school hours Daigo paints pictures in the studio or the outside near the guest house.
Looking such Daigo’s way of doing things Mrs. Mimura was inspired to create
artwork.

She learned the artwork from Mr. Ogikubo, the advisor of the Toyoshina Modern Art Museum, who died in February this year at the age of 84.
She says with thanks that Mr. Ogikubo praised our works so that we were encouraged to stimulate further improvements of our artistic ability.

Daigo portrayed snow fell in Kawashima with the use of pure white plaster that was put on the wall of the guest house when renovation of the house was carried out .
It is a cool artwork.

They, Mikako and Daigo will make a good effort to create better artworks for years to come.